I have decided to start a blog on how NOT to be an artist and I need your help.

This is because for some time now I’ve been feeling the pressure of what it is to BE an artist.  The thing is as soon as you call yourself a title – could be any title, then a whole set of expectations seem to automatically land on your shoulders.  Actually in my case, I’ve always felt that art chose me, rather than the other way around.  Lets face it, growing up there weren’t too many options…. you know, it wasn’t like…Quantum Scientist OR artist? No – it was always ART and it probably always will be.

Now don’t get me wrong I love what I do and I intend doing this for as long as possible, its just these subtle labels that we impose on ourselves which seem to hold

and control and actually limit our creative potential.

Let me give an example.  Recently I completed a high profile private commission.  When I first got the call, after the initial excitement (always) I thought this is impossible; but then, not being one to say no, I said YES and embraced the whole process.  It was intense from beginning to end and completely took over life for 6 weeks – but we made it (Yes I had an amazing team) and the client was delighted.

JOB DONE you might think?  Well yes, and yet I felt so completely spent and empty at the end of it that this got me thinking WHY?  To my mind, there were a few reasons – firstly that I felt I had not been remunerated fairly (work in progress!) and secondly and more acutely – this looming sense of loss at the end of a project – that suddenly you just have to let go of something that you have created with passion and conviction and intensity.

So, what if I didn’t feel so passionately about everything, that I just ‘did the job’ rather than identify as the sole creator and originator.  It was quite clear looking back at the process that my role was to meet the client, understand the brief, then follow through and deliver.  In fact this job, like many was multi faceted – not just artist/designer/maker but project manager too.  And largely this is what happened!  It was kind of miraculous watching it all unfold step by step.  Starting with a clear vision and concept then seeing how it evolved over the weeks.  It felt so joyous, so natural and organic and not like work at all UNTIL the end! …and that’s when it got me – just how much energy this took – and it was a bit of a dark slippery slope from there and I ended up feeling bereft, rather than elated and happy yet tired.

So my reason for sharing these thoughts is to challenge myself to keep doing what I love- giving 100% but learning how to do that without that sense of ‘artist’ or ‘arsetit’ as my good friend insists on calling me. 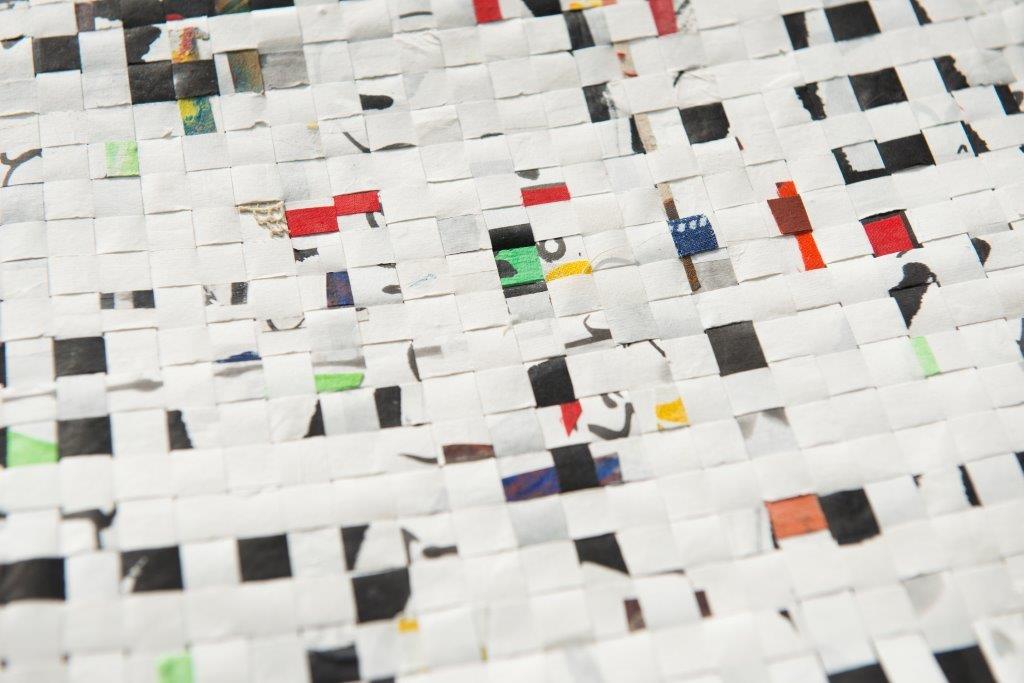 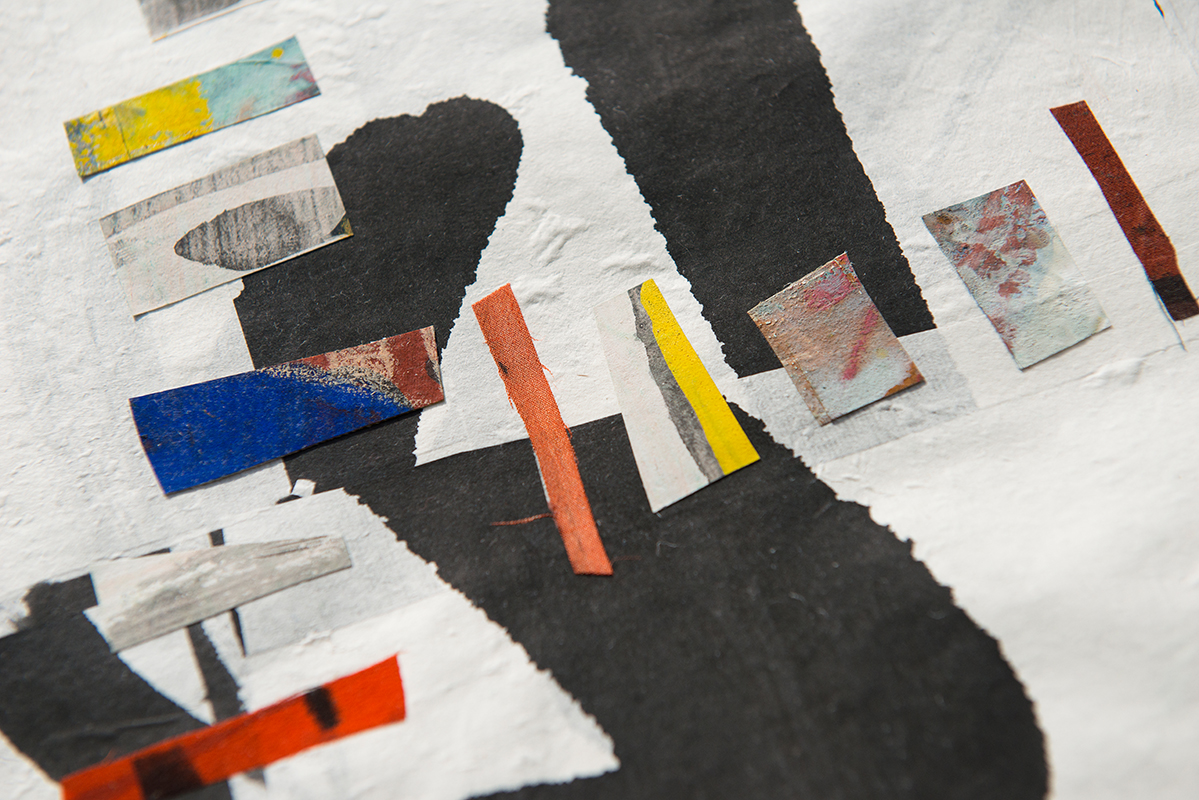 This series of woven collages ‘Unnamed Territory’ are the result of three years of ‘life’.
‘As life transforms itself endlessly, so these collages have been through many forms and settled here, as a woven collage of mark and meaning, texture and colour’.

Come along to the gallery to witness ‘live’ calligraphy with a brush and nib and receive your bespoke piece! 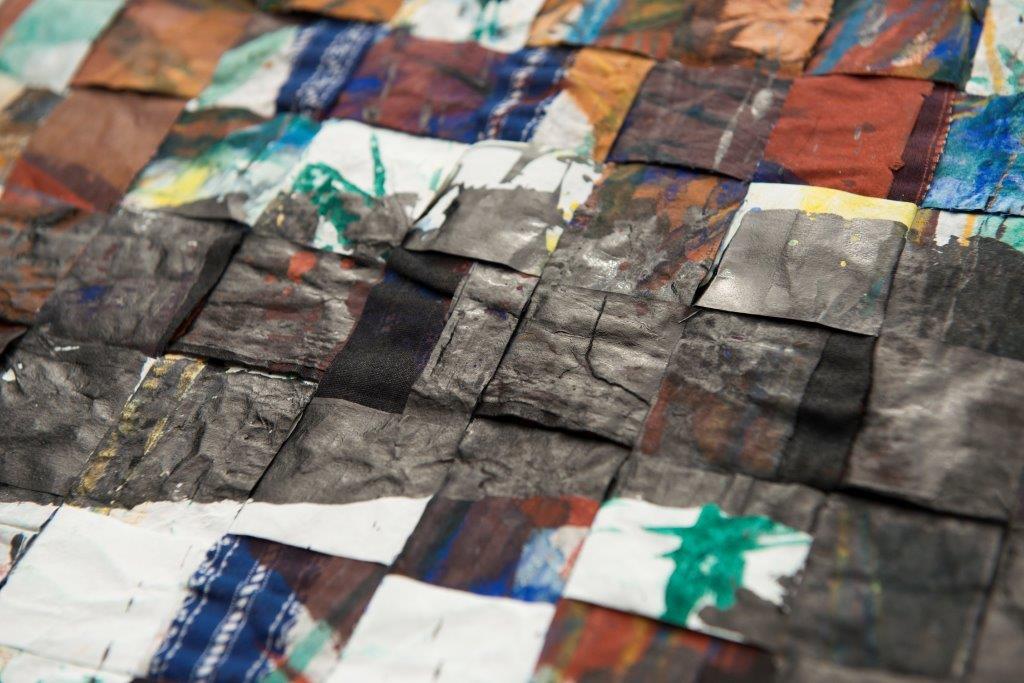 These collages are the result of three years of life.  Imagine all those events, happenings, thoughts and feelings that occur over time and here is the result — an unnamed territory.    The textiles used to form the collage are as diverse in origin as those events, as is the paper and ink, originally from Japan.  These pieces have journeyed with me to India and parts of Europe becoming the diary of my soul.  Poetry, mark making, painting has been imagined on the surface at one time, only to be re formed into a new surface and landscape.  As life transforms itself endlessly, so these collages have morphed through many phases to settle here.

I am delighted and thrilled to be part of Makers House— a collaboration between The New Craftsmen and Burberry for this September’s London Fashion Week. It is a temporary curated space at No 1 Manette Street, Soho and will be open to the public 21st-27th September where makers selected by The New Craftsmen bring Burberry’s new collection to life through installations, demonstrations and performances.

I am pleased to be part of London Craft Week, taking place from 3-7 May 2016 featuring hidden workshops and unknown makers alongside celebrated masters, famous studios, galleries, shops and luxury brands.

Join me at The Welcome Collection on the 5th May to hear about my project ‘The Stitch Lives of London’, which tells the story of London and Londoners through text and textile. I will be showing my latest piece ‘Life Restored’, based on a t-shirt donated by mental health campaigner Jonny Benjamin. You are invited to bring along your own garment for use in the project.

Hello and welcome to my first blog post for 2016.

The year has started with terrific energy thanks to the launch of the latest piece of The Stitch Lives of London.

â€œMy faith in life, thanks to Mike, is restoredâ€- Jonny Benjamin. This story is about hope and a life restored; it is a contemporary London tale.

Jonny Benjamin has donated the white t-shirt he was wearing on the 14th January 2008 as he was about to commit suicide.  He describes his thoughts and feelings in his poem From the Edge of Waterloo Bridge hand written in his own diaries. I have hand stitched the whole poem by hand onto the t-shirt. I believe the handwriting of an individual is like their voice — when I stitch it onto a garment they have worn their story comes to life.

On that fateful morning, one Londoner stopped and talked Jonny down from the bridge. Jonny called him ‘Mike’ and six years after the event a London wide campaign was launched to reunite them. The #findmike campaign went viral and they eventually met back on the bridge. The stranger’s name was Neil.

The front of the garment has been saturated in black ink and indigo — a reference in his diaries to his ‘indigo mood’. We see what he sees as he stands on the edge of the bridge — London’s iconic cityscape printed in contrasting white against an inky backdrop. For me, Neil represents humanity. He was the stranger who stopped and said ‘We could go for a coffee…talk it over? Whatever it is, it isn’t worth your life’.

The back of the t-shirt is lighter and a witty reminder of Neil’s statement:

â€œIt’s weird because it’s like we are like old friends, we’re very similar.  I’m Batman and he’s Robin.  Maybe we were always meant to be in each other’s lives!â€

On seeing the piece Jonny said;

I was delighted when Rosalind asked me to a part of the project. Having seen her previous work I was very excited to see what she would create with the poem and item of clothing I gave her. Seeing the finished piece was wonderful. Rosalind has turned what was extremely bleak and dark into something so colourful and full of life. I hope it inspires others who see it that it is possible to overcome and transform adversity in life.

The response to the piece has been overwhelmingly positive and the London press have got behind the project.

I have picked up my brush and ink to try to visualize this long ‘tapestry’ of garments — so far, there are eight completed; but since the River Thames is 215 miles in length the hunt is on for the rest!  If you think you have a garment or a story worth including in The Stitch Lives of London please contact me.

Many thanks to Marte Lundby Rekaa for my images.